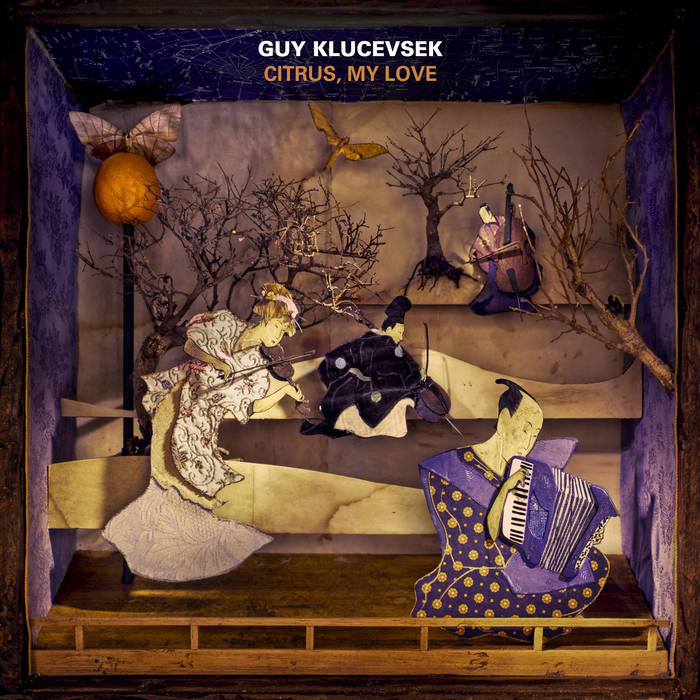 “The album contains some of my most personal, deeply felt, emotional music, which is why I'm incredibly excited and delighted Starkland is re-releasing it.”
– Guy Klucevsek

Starkland’s re-issue of Guy Klucevsek’s “Citrus, My Love” album, out of print for over 25 years, replaces a gaping hole in this master accordionist’s discography. The release offers two substantial works composed for dance, Citrus, My Love (25’) and Passage North (19’), separated by another piece Patience and Thyme. Listening today, Klucevsek finds the music is “solemn, introspective, and incredibly personal.”

In addition to the standard digital album (the music and a thorough 10-page booklet) listed here, Starkland also offers a special Bonus version consisting of the standard album and exclusive access to 13 new videos, in which Klucevsek discusses each track, the release as a whole, compositional techniques, and influences ranging from choreographers he’s worked with to various composers, such as Morton Feldman, Steve Reich, and Philip Glass.

“It broke my heart when the ‘Citrus, My Love’ recording went out of print” Klucevsek wistfully recalls. Starkland’s re-issue presents all of the original notes, along with new, updated materials.

In Mark Dery’s original Introduction, he comments that the title piece “evinces a rare gift for harmonizing sumptuous textures and unvarnished simplicity.”

Klucevsek’s Patience and Thyme “is a love note to my wife, Jan.” He composed the work while in residence at the Yellow Springs Institute in Pennsylvania, which coincided with his 22nd wedding anniversary.

“I’m especially proud of the 13 new videos” Starkland’s Tom Steenland states. “I wanted to give meaningful insights into each track, as well as the album as a whole, and to collectively provide a mini-documentary explaining how Guy embeds complexity into his seemingly simple music.”

Guy Klucevsek is one of the world’s most versatile and highly respected accordionists. A composer as well as an accordion virtuoso, he has performed and/or recorded with the American Composers Orchestra, Laurie Anderson, Alan Bern, Brave Combo, the Buffalo Philharmonic Orchestra, Dave Douglas, Bill Frisell, the Kronos Quartet, Natalie Merchant, A.R. Rahman, Tom Waits, and John Zorn. Klucevsek also performed on the John Williams film scores for Spielberg’s The Terminal, Munich, Indiana Jones and the Kingdom of the Crystal Skull, and The Adventures of Tintin; as a guest on Mr. Rogers’ Neighborhood; and with soprano Renée Fleming at the memorial service for Senator John McCain. His group Accordion Tribe – a quintet of international composers/accordionists with Bratko Bibic (Slovenia), Lars Hollmer (Sweden), Maria Kalaniemi (Finland), and Otto Lechner (Austria) – released three albums and is the subject of Stefan Schwietert’s documentary film Accordion Tribe: Music Travels. Klucevsek is the recipient of a 2010 United States Artists Collins Fellowship, “recognizing the most compelling artists working and living in the United States.” He has written over 100 pieces for accordion for the ballroom, the beer garden, the concert hall, and for collaborations with choreographers, theatre artists, and filmmakers.