Guy Klucevsek: Teetering on the Verge of Normalcy 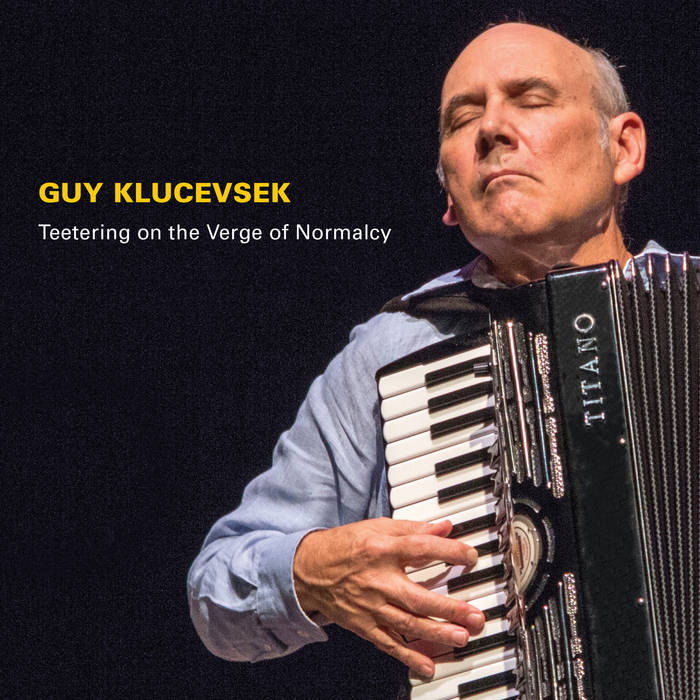 “Friendship and tributes bind this album together” is how new music pianist Sarah Cahill describes this CD from the “trailblazing virtuoso” (Wall Street Journal) accordionist Guy Klucevsek. “Compared to his previous work, this heartfelt album has an especially elegiac quality, informed by the loss of comrades and colleagues.”

Kyle Gann once wrote, “Klucevsek writes the world’s most abnormal ‘normal’ music.” Cahill also discusses the sly complexities of the CD’s works, then adds, “What is amazing, then, is how natural and right this music sounds,” adding this is “an album you can dance to.”

Other pieces are tributes to composers who have inspired Klucevsek: Three Quarter Moon for Kurt Weill; Little Big Top for Fellini’s long-time composer, Nino Rota; and The Asphalt Orchid for Astor Piazzolla. The violin and accordion duos are part of the score for Ruth Doesn’t Live Here Anymore, a dance work inspired by the modern dance pioneer, Ruth St. Denis. Klucevsek identified with her works’ eclecticism and world cultures roots, both of which have been reflected in his music for decades.

He wrote Haywire Rag (A Waltz) for his friend Joseph Franklin, founder and long-term Director of the new music group Relâche and Ice Flowers for fellow accordionist Otto Lechner.

Guy is joined on these recordings by stellar musicians whom he hand-picked, including violinist Todd Reynolds, soprano Kamala Sankaram, and pianist Alan Bern.

Klucevsek has redefined the status of the accordion in new music. As a “rebel with an accordion,” he “combines poker-faced wit and imagination with command of his instrument, forcing you to re-think the accordion’s limitations” (Downbeat). He is “a remarkable performer on a remarkable instrument” (Village Voice), and the uninitiated must “forget everything you thought you knew about the accordion” (The Seattle Weekly).

Guest appearances include performances at the Ten Days on the Island festival (Tasmania), the Adelaide Festival (Australia), Jazzfest Berlin, Lincoln Center, Spoleto Festival USA, BAM Next Wave Festival, Vienna International Accordion Festival, and the children’s television show “Mr. Rogers’ Neighborhood.” Klucevsek can also be heard on John Williams’s orchestral scores for the Steven Spielberg films, “The Terminal,” “Munich,” “Indiana Jones and the Kingdom of the Crystal Skull,” and “The Adventures of Tintin.”