by Instruments of Happiness 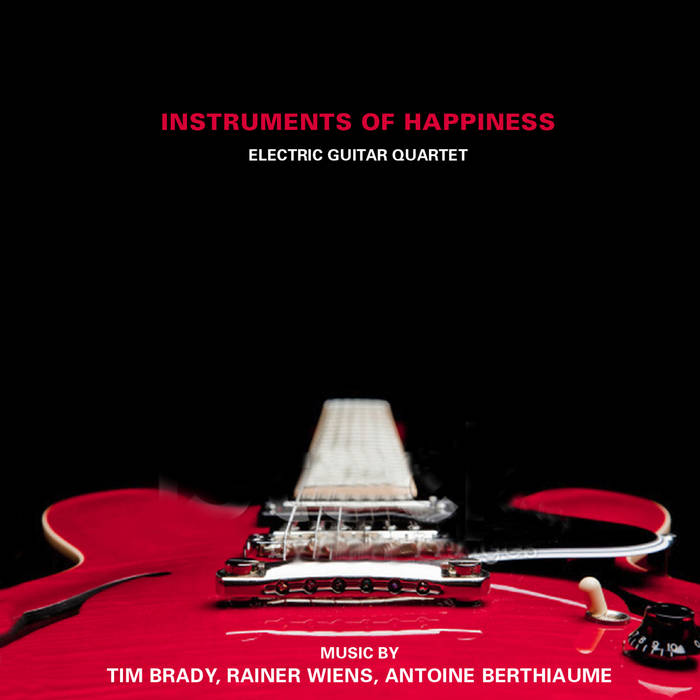 “Fans of compelling, contemporary orchestrations would do well to pick up this album. It may also interest listeners of unconventional rock music, as it brings to mind the works of Glenn Branca, Jim O’Rourke or even Lou Reed ... released by leading avant-garde imprint Starkland.”
– Classicalite

“As an exploration of an electric guitar ensemble’s sonic grandeur – and subtlety, too – Brady’s Symphony No. 5, heard in two versions on this disc, is hard to top.”
– Allan Kozinn

The debut recording of Instruments of Happiness combines elements of experimental art-rock, chamber music, electroacoustics, orchestral music, and more. The electric-guitar quartet was founded by Canadian guitarist-composer Tim Brady, named “One of the 30 most important guitarists for the future of the instrument” by Guitar Player.

The CD premieres Symphony No. 5, in two versions, from Brady, whose music has been praised as “haunting and explosive” by Gramophone, “highly recommended” by The Wire, and “exuberant” by the New York Times.

The first version, The Same River Twice: Symphony #5.0, is a multi-sectioned work scored for the full quartet. Kozinn notes “Brucknerian lumbering, a big, deep, chord that wrests the attention … a slow, dreamy haze, rich in melodies … a funky waltz – with occasional hints of 1960s surf guitar [and] an exciting finale.”

The second version, The Same River Twice: Symphony #5.Solo, is written for a single guitarist. Kozinn hears: “1970s art-rock guitarists like Steve Hillage of Gong, Steve Howe of Yes, and David Gilmour of Pink Floyd. Brady’s sound is his own, of course, but his flowing, rounded themes evoke the spirits of art-rock experimentalism.”

The CD also offers music from Antoine Berthiaume and Rainer Wiens. Berthiaume’s Fungi builds a slow harmonic ascension in a 6/4 meter, inspired by progressive rock and the music of Ennio Marricone. Wiens’ What Is Time? explores the timbral possibilities of prepared guitar and the use of human breath as the rhythmic determinant. Kozinn finds “a dark, often eerie exploration of space, texture and atmosphere, as compelling as it is unsettled and puzzling.”

Tim Brady has been at the forefront of creating contemporary classical music for electric guitar for over 30 years. He has appeared as a soloist at such venues as The South Bank Centre (London), Radio-France (Paris), The Muziekgebouw (Amsterdam), Merkin Hall (New York), and REDCAT (Los Angeles). Brady has been commissioned by numerous ensembles, including the Vancouver Symphony, the Orchestre symphonique de Québec, Symphony Nova Scotia, INA-GRM (Radio France), The Relâche Ensemble (Philadelphia), and the Opéra de Montréal. He has received Prix OPUS awards for “Composer of the Year” and “Best New Composition of the Year” (for Atacama: Symphonie #3).

ABOUT INSTRUMENTS OF HAPPINESS

The electric-guitar ensemble Instruments of Happiness comes in three sizes: a quartet, a 16-to-20-piece orchestra, and a 100-piece ensemble creating extraordinary site-specific spatialized new works. Released by Starkland, the group’s first CD received excellent reviews. The ensemble presented a 100-guitar concert in Vancouver at the Modulus Festival in 2016, an homage to Jimi Hendrix in Montreal in 2017, a feature performance for 100 guitars at Toronto’s Luminato in 2018, and a massive 150-guitar event in Montréal to an audience of 3,200 people at the Festival MNM in 2019. Also in 2019, their “The Happiness Handbook” CD, released by Starkland, was awarded a Gold Medal by the Global Music Awards in the United States, as well as a Prix Opus in Québec.