International Contemporary Ensemble: On The Nature of Thingness 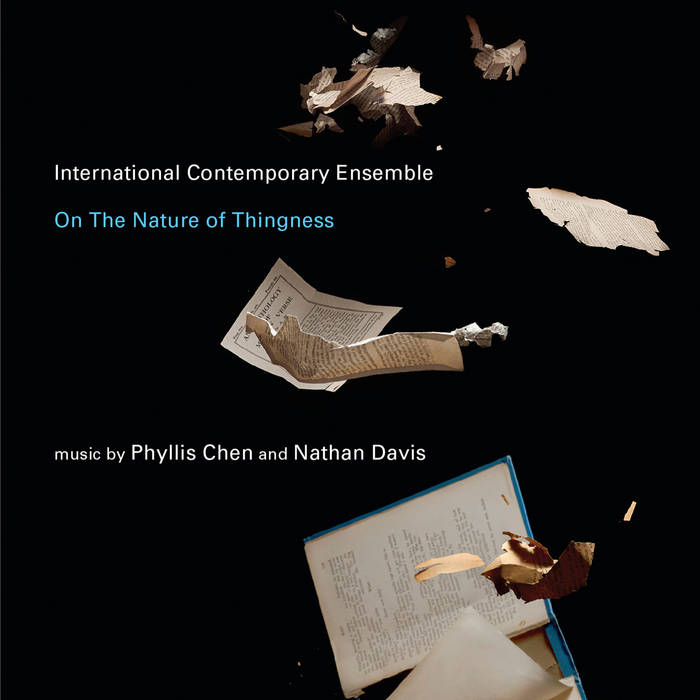 In the CD’s Introduction, ICE co-founder and MacArthur “genius” Claire Chase comments, “Phyllis is nothing short of a magician in her ability to modify and re-appropriate instruments,” adding, “It’s as if her music takes us by the hand and leads us back into the daunting and wondrous solitude of our childhoods.” Regarding Davis’s music, Chase observes, “Nathan’s compositional sorcery is in his uncanny capacity, much like the artist Olafur Eliasson, to shine a light on a natural element, revealing a breathtaking world of poetry that lies just beneath the surface.”

The CD’s largest piece is Davis’s 19-minute On the Nature of Thingness (2011). Written for soprano and ten instrumentalists, the work received a glowing review of its premiere in the New York Times: “Tony Arnold offered dramatic, multihued interpretations of the four texts… of this colorful song cycle.”

Davis wrote Ghostlight for ICE pianist Jacob Greenberg, who premiered it at Lincoln Center’s Mostly Mozart festival in 2013. The piano is “prepared” by placing objects on or between the strings of certain notes to create microtonal beatings and gong-like sounds. Seen and Heard International commented Ghostlight is “a fine new solo piano journey” producing “tingling sonorities from the instrument’s strings.”

Another Davis piece is On speaking a hundred names (2010) for bassoon and electronics, written for and premiered by ICE performer Rebekah Heller. The New York Times commented the premiere was “played with flair by Rebekah Heller. She deftly illuminated its eclectic moods and myriad timbres — which ranged from breathy, guttural noises to rhapsodic melodies in a high register.”

Chen’s four works on the CD employ imaginative, unusual instrumentation. For Hush (2011), dedicated to her daughter, Zoe, Chen aimed for a childlike energy in preparing a piano by applying parts of a broken music box, such as the wheel, screws, and bolts, to the strings, to produce sounds that resemble a toy piano. Additional sounds come from a music box, metallic bowls, and a miniature toy piano.

Premiered at the Mostly Mozart Festival in 2012, Chimers (2011) was inspired by the magic chimes used in The Magic Flute that protect Papageno and Tamino. Chen adapted this sound world to her toy piano, along with toy piano rods standing upright on the toy piano. These rods are played with tuning forks both as mallets as well as their more “conventional” approach, resonating against the body of the piano.

Chen created Mobius (2013) with her longtime partner Rob Dietz for customized music boxes. In real-time, a performer punches holes into a strip of paper, that is hand-cranked through a music box, each hole allowing a music box tine to sound. The strip is taped together in a Mobius fashion so that a second music box plays the notes upside-down. These acoustic sounds are also digitally processed, resulting in a rich collage of music box timbres.

Chen’s Beneath A Trace of Vapor (2011) was written for flutist Eric Lamb, who is accompanied by recorded sounds of his improvisations, inhales, and exhales.

Phyllis Chen is a pianist, toy pianist, and composer, described as “a dazzling performer who wrings novel sounds from the humble toy piano,” (New York Times). Recognized by the Chicago Reader as “one of the world leading proponents of the toy piano,” she is the founder of UnCaged Toy Piano, dedicated to expanding the repertoire for toy piano. Chen’s compositions have been described as “spellbinding” (New York Times) and “mesmerizing” (Chicago Reader). She is one of the composers for the one-woman play, The Other Mozart, about Wolfgang Amadeus Mozart’s forgotten sister Nannerl, performed and written by Sylvia Milo. In 2015, Chen finished a work, commissioned by the Singapore International Festival of the Arts, for the avant-garde pianist/toy pianist Margaret Leng Tan. Chen will compose a new work, for the JACK Quartet and toy piano, set to premiere at the Look & Listen Festival in May 2016. She is a founding member of the International Contemporary Ensemble, and has previously released four albums on Concert Artists Guild, cerumenspoon, New Focus Recordings, and fyo records.

Nathan Davis “writes music that deals deftly and poetically with timbre and sonority” (New York Times). Lincoln Center inaugurated the Tully Scope Festival with the premiere of his landmark work Bells and has presented other premieres at the Mostly Mozart Festival. He has been commissioned by ICE, American Opera Projects, Calder Quartet, Yarn/Wire, Steven Schick, Donaueschinger Musiktage, and the Ojai Festival (with sound sculptor Trimpin). Davis’s music has been performed at New York’s Carnegie Hall, Park Avenue Armory, Miller Theatre, (Le) Poisson Rouge, and Roulette; in a portrait concert at Spoleto USA; and internationally at Darmstadt, Helsinki Musica Nova, Aspekte Salzburg, and Acht Brücken Köln. He has received awards from Meet The Composer, Fromm Foundation, Copland Fund, Jerome Foundation, MATA, and the American Music Center. With Phyllis Chen, Davis scored Sylvia Milo’s acclaimed monodrama The Other Mozart. As a percussionist, he is a member of ICE and has appeared as a concerto soloist with the Seattle Symphony, Tokyo Symphony, and Nagoya Symphony.


Praise for this CD:

"Best of the Year List"
- The Big City Blog

"Album of the Week: As satisfying to the intellect as they are exciting to the ear."
- WQXR/Q2

“Both composers, while very different creative personalities, write music that is fresh, imaginative, and rooted in the physicality of performance.”
- Fanfare

"Many American new music organizations and presenters should take an example from the careful thought, hard work, and loving care that informs every aspect of this release... the engineering is outstanding." - Classics Today