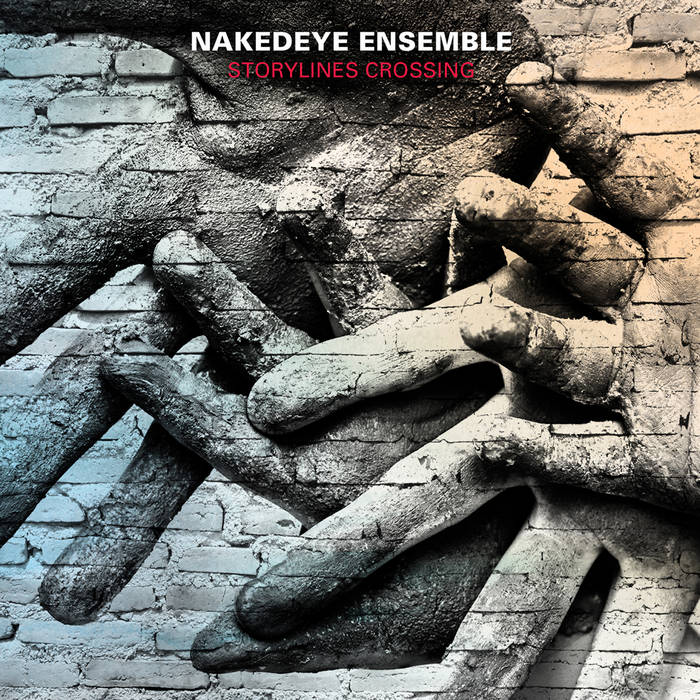 “This young ensemble has shown a wonderful commitment to commissioning and championing new music, so I’m not surprised they’re releasing this ambitious, impressive album.”
– Lainie Fefferman

This NakedEye Ensemble debut recording helps refute the notion that contemporary classical music is isolated from the world we live in. Three works have a sociopolitical slant, and several pieces draw on the energy that rock offers.

The pieces are inspired by a wide variety of subjects, including: the Vietnam War; the infamous Attica Prison riots; the development of a “groovy” bass line; and the antics of catnip-fueled cats. Five of the six works receive their premiere recordings, and the sixth work presents a new music masterpiece in a new, unusual arrangement.

Zack Browning’s “Decade of the Dragon” was written to mark the 50th anniversary of the beginning of the Vietnam War and the 40th anniversary of the end of that war. Strongly evoking the powerful emotions associated with the war, the piece features the rebellious sounds of a piercing, distorted electric guitar and driving drum set that effectively echo the countercultural rock music of the 1960s, which featured prominently in the anti-war protests at that time. Variations on a traditional Vietnamese tune also appear.

Randall Woolf’s first love was the blues, and he’s observed a lot of music throughout the world sounds like the blues, with a commonality of wailing, driving rhythms, sliding notes, and rough percussive sounds. “Punching The Clock” uses bits of work songs from around the world, surrounded them with new harmonies and melodies, while juxtaposing and blending them, aiming for something new yet familiar to people everywhere. In the CD’s Introduction, Lainie Fefferman notes the piece “complements work songs from around the world with settings evoking actual work sounds: dry percussion hits, spiky high piano clusters, wailing guitar notes, chaotic bursts of ensemble writing. It’s easy to imagine these sampled songs in the context of the machines and environments that inspired them.”

Frederic Rzewski is well known as a composer of strong, leftist political convictions. He shatters structuralist convention but calls for social change with powerful use of folk songs, narratives, and politically charged texts. Rzewski’s masterpiece “Coming Together” was inspired by the 1971 riots at New York’s Attica prison and text from a letter written by an inmate, Sam Melville, who was killed in the riots. Less well known is that Melville was originally imprisoned for eight bombings in New York City, reflecting his opposition to the Vietnam War. In 2017, Attica’s dark history resurfaced in the news for its leprosy experiments on nonconsenting inmates.

Regarding this new arrangement, Fefferman comments, “The tapestry of different voices in Belcastro’s dynamic arrangement of Rzewski’s classic Coming Together unfolds here as a combination of all manner of whispers, screams, and monotone, taking advantage of studio mixing magic while bringing a sensibility of Marxist theater or community town hall meeting.”

Rusty Banks’ “Surface Tensions” deals with sonic viscosity, begins with quiet, scratching sounds, moves into a “gelatinous structure,” adds harder sounds that expand the “gooier” material, and at the end bursts forth with a powerful finish. “Banks’ Surface Tensions uses NakedEye’s instrumentation with lovely detail and freshness. Beginning with those deliciously close-miked scratching sounds of the piano, bass, and guitar, Banks sets you up to hear more traditional ensemble combinations with perky, open ears. Sometimes deploying rich, thick ensemble writing, sometimes giving ample space to chains of thin, dovetailing subsets of players, Surface Tensions is like a walk through a pleasant, variable city neighborhood on a brisk, breezy day” (Fefferman).

Jonathan Russell’s infectious “Sextet” began with a groovy little bass line that became the backbone of a dramatic and wide-ranging work. Fefferman writes, “Its licks and loops are jaunty and fun” and “Sextet fits nicely in the tradition of buoyant, toe-tapping post-minimalism – the punchy bass lines are just heavy enough to evoke rock energy, while the sparkling melodic lines tie into a smooth, well-crafted, chamber music tradition.”

Richard Belcastro’s “Smoke n’ Wid” was inspired by the playful, manic state of chaos when two cats found themselves in a large cardboard box, along with a pile of catnip. Fefferman describes the work as “an adorable four-minute valentine to his wife’s cats,” adding, “it’s tough not to smile imagining balls of fur tearing around a box.”

Regarding the overall CD and its title, NakedEye’s founder Ju-Ping Song comments, “Because members of the group come from diverse stylistic backgrounds, our music reflects the rock, jazz, experimental, and classical genres that define each musician separately. For us and for composers writing for us, this is a journey where storylines cross from the personal into the musical.”

The album was mastered by Grammy-winner Silas Brown.

Rusty Banks (b.1974) has been listed by NPR’s Q2 as one of 100 composers under 40 “shaping our contemporary musical scene and defining what it actually means to be a composer in the 21st century.” Banks’ commissions range from works for wind band, orchestra, and chamber groups to site-specific works that combine live performance and sound installation.

Richard Belcastro (b. 1976) is a composer whose music has been called “an eclectic blend of melodic and rhythmic elements of Jazz and Rock and Roll with a uniquely contemporary harmonic vocabulary” (New York Concert Review). His music is composed for a variety of instrumental combinations ranging from the very traditional to the distinctly odd as well as ventures into electro-acoustic music and purely electronic explorations. Belcastro studied music composition at the University of California in Davis, Brandeis University, and the University of Pennsylvania.

Zack Browning (b. 1953) is a composer whose music is described as “way-cool in attitude … speed-demon music” (The Atlanta Journal-Constitution) and “propulsive, giddy, rocking … a rush of cyclic riffs and fractured meters” (New York Times). The Irish Times proclaimed that Browning is “bringing together the procedures of high musical art with the taste of popular culture.” His “Banjaxed” CD is “the aural equivalent of the pinball machine. Imagine sassy, brilliant bumpers with each slam of the ball sending a glitter of lights and mechanical twitters through your chest” (American Record Guide). Browning is an Associate Professor Emeritus at the University of Illinois and director of the Salvatore Martirano Memorial Composition Award.

Jonathan Russell (b. 1979) is a composer, clarinetist, bass clarinetist, conductor, writer, and educator, especially known for his innovative bass clarinet and clarinet ensemble compositions. He has also developed a reputation as a skilled arranger of canonical works for implausible combinations of instruments, such as The Planets for woodwind quintet; J.S. Bach’s Toccata and Fugue in D Minor for two bass clarinets; The Rite of Spring for two bass clarinets, electric guitar, and percussion; and Petrushka for two clarinets and bass clarinet. As a performer, Russell makes frequent appearances as a soloist and as a member of the Sqwonk bass clarinet duo; he was also a longtime member of the legendary, heavy metal-inspired Edmund Welles bass clarinet quartet. Russell has studied at Harvard, San Francisco Conservatory, and Princeton.

Frederic Rzewski (b.1938) is a composer of strong, leftist political convictions and a highly regarded pianist who writes virtuosic piano pieces that demand impressive command of the instrument. He is formidable, both as a composer with a deep political conscience, and as “a granitically overpowering piano technician, capable of depositing huge boulders of sonoristic material across the keyboard without actually wrecking the instrument” (Nicolas Slonimsky in Baker’s Biographical Dictionary of Musicians). A founding member of the experimental collective Musica Ellettronica Viva (MEV), Rzewski later began to experiment with large structures created out of self-propelling variation forms and juxtaposition of popular and modernist styles of music. The People United Will Never Be Defeated, an hour-long piano odyssey, is one such piece, and Coming Together is another. Like Ives, Rzewski shatters structuralist convention but calls for social change with powerful use of folk songs, narratives, and politically charged texts.

Randall Woolf (b. 1959) has been described “as if Beethoven had taken a temp job as James Brown’s arranger” (San Francisco Chronicle). He studied composition privately with David Del Tredici, Joseph Maneri, and at Harvard, where he earned a Ph.D. Woolf is a member of the Common Sense Composers Collective, and was the Composer/Mentor for the Brooklyn Philharmonic. He works frequently with John Cale, notably on his score to “American Psycho.” Woolf has arranged over 40 of Cale’s songs for orchestra, including the entire “Paris 1919” album and “Music For A New Society.” His works have been performed by Kathleen Supové, Jennifer Choi, Timothy Fain, Mary Rowell, Todd Reynolds, Ethel, Ransom Wilson, Tara O’Connor, Le Train Bleu, the Brooklyn Philharmonic, Kronos Quartet, TURNmusic, Pittsburgh New Music Ensemble, Righteous Girls, American Composers Orchestra, Seattle Symphony, and others.

NakedEye Ensemble, whose concerts are “ear and mind opening experiences” (Lancaster Newspaper), commissions and performs new work by cross-over and cutting-edge composers. This eclectic eight-member electro-acoustic group with classical, rock, and jazz DNA presents music of the imagination. Based in Lancaster, PA, NakedEye Ensemble is led by pianist Ju-Ping Song.