Pamela Z: A Delay is Better 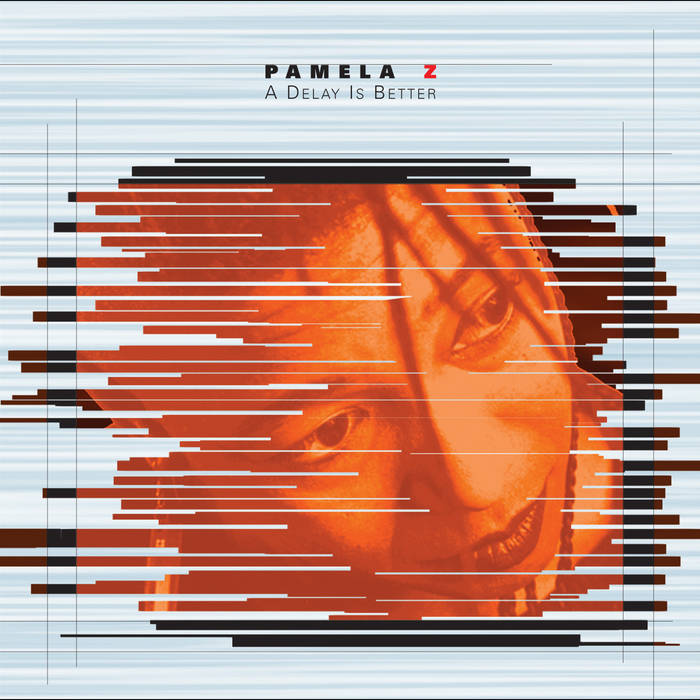 Elizabeth Joan Kelly Pamela Z is one of the most inventive and important composers of the 20-21st centuries, and this album is a fantastic introduction to her work. Favorite track: Bone Music.

A Delay Is Better was the first and still the only CD devoted exclusively to works by the "funny, inventive, and talented" (Village Voice) composer/performer Pamela Z, and the recording offers some of her most widely enjoyed signature pieces.

The New York Times writes the "acclaimed internationally" Z is "a wonderfully compelling performer with a lot of range." The New Yorker comments that "at the center of it all is the simple beauty of her classically trained voice – which can give her work an almost medieval purity." And the San Francisco Chronicle has enthusiastically commented that "Z creates lustrous sonic landscapes."

The essence of Z's mesmerizing music is a skillful blending of her lovely voice with refined electronic manipulations. Pauline Oliveros writes that "this CD beguiles us with a rich introduction to a fine vocalist/composer who adeptly embraces technology," noting that Z "invigoratingly explores great varieties of solo, chorused, extended, and manipulated vocal materials."

The CD opens with the haunting, mysterious Bone Music, a staple of Z's solo repertoire in which she pounds an empty five-gallon water bottle as background to a wordless melody and gradually mixed in delay loops. The bewitching Badagada is a typical example of Z's early works for voice and delays that involved floating a melody over digital delay loops of short, melodic motifs.

The CD's third track is Number 3, a live recording of an improvised duet between Z and San Francisco choreographer Jo Kreiter. The only pre-determined element was a bank of vocal samples. In the performance, Z triggered the samples with her BodySynth™ and processed her live voice with digital delays.

When Z first moved to San Francisco, she worked at Tower Records. She took the text of the curiously entrancing Pop Titles 'You' entirely from one page of the 'Y' section of the pre-internet Phonolog Report, a large, yellow catalog that listed all currently available titles. Z reports that in concert, listeners react with a Rorschach-like variety of personal responses.

The lovely, captivating, and edgy In Tymes of Olde first appeared on Starkland's From A to Z sampler CD. Z originally created the piece to be performed live with two digital delay units, and for this Starkland recording she chose to augment it with additional vocal samples, triggered via keyboard in the studio.

Regarding the next two pieces, Z writes:

"The MUNI Section and NEMIZ are both from a suite of works called Metrodaemonium, commissioned by Secession Gallery for a site specific sound series. To create the samples, I carried a portable DAT recorder as I walked and rode public transportation through the streets of San Francisco. ('NEMIZ' is the unfortunate 1990s acronym for my neighborhood – the Northeast Mission Industrial Zone.)"

Z created the droll, witty Geekspeak for her radio piece Parts of Speech. During an artist-in-residency at Xerox PARC in Palo Alto, she met a number of computer researchers and programmers. Here she masterfully manipulates samples of their voices as they provide the definitive word on the differences between "nerds" and "geeks." The querulous Questions is another segment from the same work.

Z explains the history of the text-driven, comically cut-up 50:

"As Charles Amirkhanian's 50th birthday approached, Nancy Karp and I decided to throw a surprise party for him. Mimicking his early text-sound compositions, I composed 50 for the occasion, and got several of his friends to perform it at the party. This recording is from a multi-track version done later that year, using only my voice."

The sample-laden Feral comes from Z's soundscore for Jo Kreiter's aerial dance work Hoist. Z recorded bassoonist Sara Schoenbeck and percussionist J Why improvising in her studio, chopped their sounds into short fragments, manipulated them with pitch-shifting, reversing, and layering, and then constructed the movement in ProTools.

The CD concludes with the mournful, ghostly Obsession, Addiction, and the Aristotelian Curve, a collaboration with harpist/composer Barbara Imhoff that also originally appeared on Starkland's "From A to Z" compilation. After receiving a stereo mix of acoustic and processed harp material from Imhoff, Z added several tracks filled with her straight and processed vocals. Imhoff says:

"The piece structurally represents the destructive, insular cycle of addition. The classic ABA form presents a gradual take-over by the 4-chord cycle of the processed, distorted harp track, which becomes a character emerging out of the addict’s nightmare state."

“Sheer genius from the most gifted and enterprising vocalist/composer/audio artist in the US since the heyday of Joan La Barbara and Meredith Monk… The effects are stunning… Essential.”
– The Wire

“Her extended vocal techniques and eclectic approach to timbre will keep even the most jaded listeners piqued.”
– New Music Box

"A skilled performer [whose voice] remains rich and nuanced whether singing, speaking, or testing the bounds of both. "
– Sequenza 21

Pamela Z is a composer/performer and media artist who works primarily with voice, live electronic processing, sampled sound, and video. A pioneer of live digital looping techniques, she processes her voice in real time to create dense, complex sonic layers. Her solo works combine experimental extended vocal techniques, operatic bel canto, found objects, text, digital processing, and wireless MIDI controllers that allow her to manipulate sound with physical gestures. In addition to her solo work, Z has been commissioned to compose scores for dance, theatre, film, and chamber ensembles including Kronos Quartet, the Bang on a Can All Stars, Ethel, and San Francisco Contemporary Music Players. Her interdisciplinary performance works have been presented at venues including The Kitchen (New York), Yerba Buena Center for the Arts (San Francisco), REDCAT (Los Angeles), and MCA (Chicago), and her installations have been presented at such exhibition spaces as the Whitney Museum (New York), the Diözesanmuseum (Cologne), and the Krannert (IL). Z has toured extensively throughout the US, Europe, and Japan. She has performed in numerous festivals including Bang on a Can at Lincoln Center (New York), Interlink (Japan), Other Minds (San Francisco), La Biennale di Venezia (Italy), Dak’Art (Sénégal) and Pina Bausch Tanztheater Festival (Wuppertal, Germany). Z is the recipient of numerous awards, including the Rome Prize, a Robert Rauschenberg Foundation residency, a Guggenheim Fellowship, the Doris Duke Artist Impact Award, Herb Alpert Award in the Arts, an Ars Electronica honorable mention, and the NEA Japan/US Friendship Commission Fellowship.