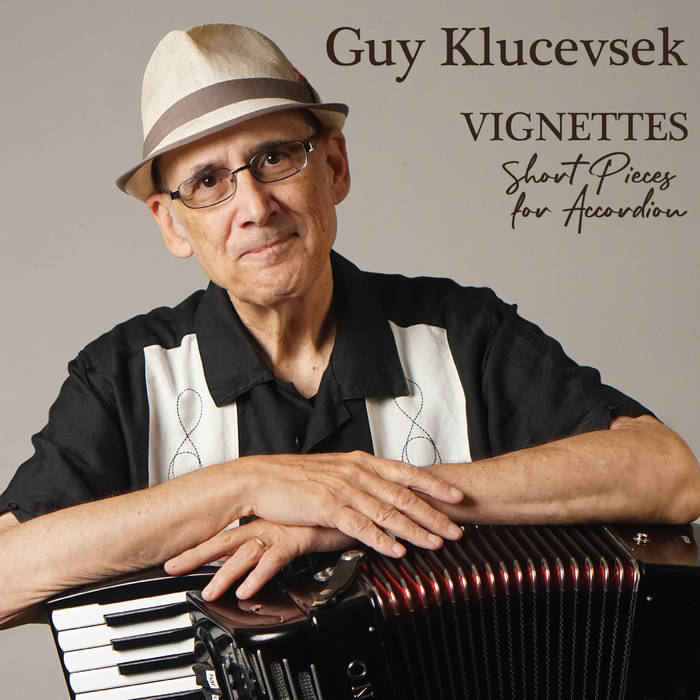 “The book looks fantastic and the music is wonderful.”
– Meredith Monk

These recordings supplement Guy Klucevsek’s “Vignettes: Short Pieces for Accordion” book, which offers scores for 24 accordion solos composed by the composer/accordion virtuoso over a thirty year period from 1988 to 2019, including his six most recent pieces.

Those who want the physical, spiral-bound book may order here:
starkland.bandcamp.com/merch/vignettes-short-pieces-for-accordion-physical-book-of-scores-bonus-recordings

“I love this book of scores, and Guy’s comments and photos are so personal and engaging. I am also deeply moved by these 24 pieces, which bring out the poignancy, wit, and universality of the accordion. I am profoundly inspired that Guy has created this rich project, which makes his legacy available to players, lovers of his music, and fans of the future. He has opened the world of the accordion to new and myriad possibilities.”

This 92-page book is intended for both amateur and professional accordionists, teachers, and students.From the intermediate accordion student or amateur player, to the accordionist who loves to play dance and genre music, to the advanced player—all will find pieces in the collection to suit their skill level and musical tastes. Printed on deluxe, 80 lb. paper, the book marks the first time Klucevsek has issued a collection of his scores and is one of the most ambitious projects of his storied career.

“This wonderful collection of original music from Guy Klucevsek represents a lifetime of creativity and achievement. His diversity of thought, his love of the accordion, and love of music are immediately apparent when listening to and/or performing each of these amazing little gems. The artwork, pictures, quality of the printed pages, and the music itself all combine to provide an absolutely beautiful keepsake publication.”

The collection reflects Klucevsek’s eclecticism and stylistic range as a composer, including pieces in social dance forms such as Birthday Waltz Elegy, The C&M Waltz, Verret’s Valse, As They Waltz off into the Sunset, Hornpipe, Feel the Bern (klezmer), Gringo Star (blues), and Some of that Old Time Soul Polka; Bagpipe, which evokes the sound of that distant cousin of the accordion; For the First Time, a jazz ballad; and Puppet Song, Barcarolle, and Spin Cycle, all songs without words.

From his classical/new music background come Prelude No. 1 and Prelude No. 2; tributes to departed friends and composers and others who have touched and inspired Klucevsek—Shimmer (for composer and friend William Duckworth), Music of Chants (for John Cage), The Landscape Listens (for Cage and Lou Harrison), Gimme a Minute, Please (My Sequins Are Showing) (dedicated to The Swingle Singers), For Lars Again (for Klucevsek’s Accordion Tribe comrade, Lars Hollmer), Dear Werner (for Klucevsek’s friend, Werner Strobel), and The Silence (for Dr. Martin Luther King, Jr.). The percussively witty Eleven Large Lobsters Loose in the Lobby combines his tongue-in-cheek and experimental sides.

The wide-ranging “Vignettes” collection includes twelve pieces for Stradella bass, eight pieces for free bass, two pieces arranged so they can be done on either system, and two pieces which can be played on any type of accordion because they require no bass buttons whatsoever.

The book and the supplemental recordings (which cannot be ordered separately) are exclusively distributed by Starkland, which has previously released several Klucevsek CDs. For further information, including links to video performances by Klucevsek of several pieces from “Vignettes,” visit:
www.starkland.com/GKM110/index.htm

Klucevsek writes, “It is my hope that these pieces may, by turns, inspire, charm, delight, and move you—enjoy!”

Guy Klucevsek is one of the world’s most versatile and highly-respected accordionists. “A master of experimental accordion music” (Keyboard), this “rebel with an accordion ... combines poker-faced wit and imagination with command of his instrument, forcing you to re-think the accordion’s limitations” (Downbeat). A composer as well as accordion virtuoso, “Klucevsek writes the world’s most abnormal ‘normal’ music” (Village Voice). He has played with an illustrious variety of pre-eminent composers and musicians, including Laurie Anderson, Tom Waits, Natalie Merchant, John Zorn, Pauline Oliveros, Bill Frisell, Dave Douglas, Kronos Quartet, Boston Pops Orchestra, Brave Combo, and Alan Bern. Klucevsek has also appeared as a guest on Mr. Rogers’ Neighborhood , accompanied soprano Renée Fleming at the memorial service for Senator John McCain, and can also be heard on John Williams’ orchestral scores for the Steven Spielberg films The Terminal, Munich, Indiana Jones and the Kingdom of the Crystal Skull, and The Adventures of Tintin. He received a 2010 United States Artists Collins Fellowship, “recognizing the most compelling artists working and living in the United States.”