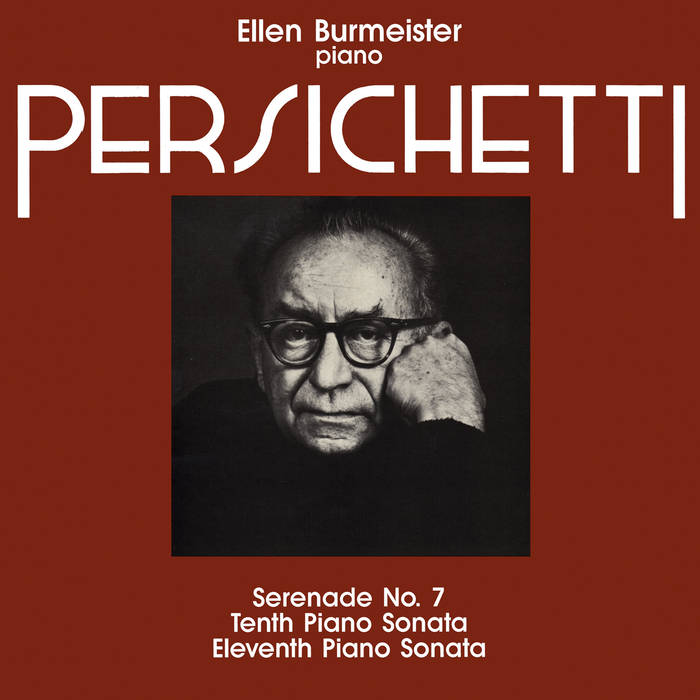 This re-issued CD of piano works by Vincent Persichetti, produced by Thomas Steenland, who also produced the 1985 album, offers the only available recording personally approved by the composer of his substantial Tenth and Eleventh Piano Sonatas. Performed by Persichetti specialist Ellen Burmeister, this release also presents the composer’s simple but charming Serenade No. 7.

Prior to the original recording, Persichetti wrote:

“It is rare when a pianist decides to play all a composer’s piano literature. Ellen Burmeister is doing that for me. I am pleased not only for her talents but also by her sound musicianship and dedication.”

Reviews of the original release praised the music, performance, and sound:

“A significant record …The Tenth Sonata is to my mind one of the finest contemporary sonatas. Burmeister … responds to the work’s complexities flexibly and ardently in a performance that must be taken as nearly definitive…The Eleventh Sonata is … hard, granitic music … Burmeister has the guts it requires technically and emotionally … A welcome addition to the recorded catalogue of an important composer.”
– Audience

The CD’s booklet reissues the full LP notes on the music.
For this reissue, the original 25-year old analog tapes were transferred by engineer David Glasser, at the Restoration Center at Airshow Mastering, to a high-resolution (176.4 kHz, 24 bit) digital format. Steenland polished these hi-resolution versions to create the new master.

Persichetti is regarded as a major figure in 20th century American music. He was an accomplished pianist, and his piano music forms a substantial part of his creative output, with a concerto, a concertino, twelve sonatas, and a variety of other pieces, virtuosic as well as pedagogical and amateur-level compositions. His wife, Dorothea, was an accomplished pianist; Persichetti composed The Eleventh Piano Sonata for her. Persichetti joined the faculty of the Juilliard School in 1947, assuming chairmanship of the Composition Department in 1963. He received three Guggenheim Fellowships, the first Kennedy Center Friedheim Award, Brandeis University Creative Arts Award, Juilliard Publication Award, and the Symphony League Award. Among some 100 commissions were those from the Philadelphia Orchestra, the New York Philharmonic, the St. Louis and Louisville Symphony Orchestras, the Koussevitsky Music Foundation, Naumberg Foundation, Martha Graham Company, American Guild of Organists, and the Pittsburgh International Contemporary Music Festival.

Burmeister was a member of the piano faculty at the University of Wisconsin, Madison, having previously taught at the University of Wichita and Iowa State University. She specialized in the music of Vincent Persichetti, Roger Sessions, and Alan Hovhaness. Burmeister performed and/or gave presentations on much of Persichetti’s piano music, including: Harmonium (song cycle); Concerto for Piano, Four Hands; Concerto for Piano and Orchestra; Piano Quintet; Sonatas for Solo Piano (No. 4, 6, 7, 9, 10, and 11); Serenade No. 7; Poems for Piano; and the Sonatinas.