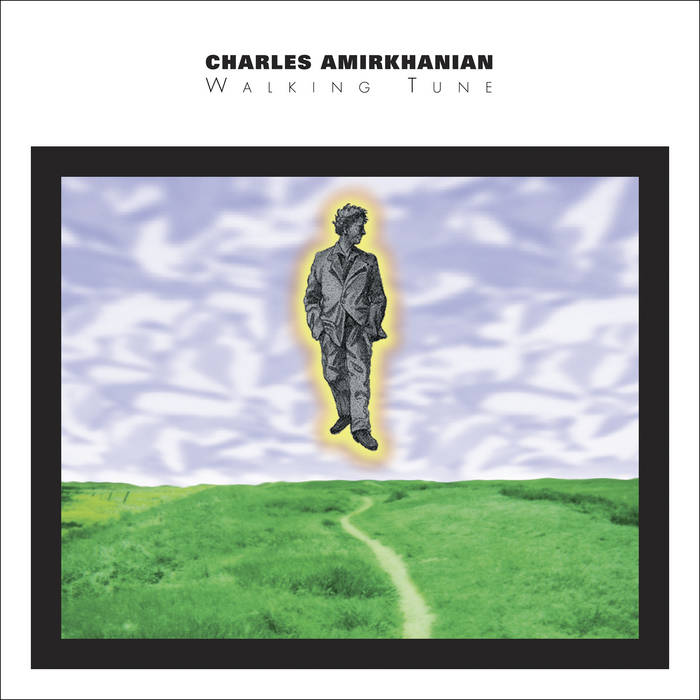 “Expert at the sort of thing his imitators do not do half so well as he” (The New York Times), Charles Amirkhanian is a leading practitioner of electroacoustic music and text-sound composition. Laurie Anderson describes this CD’s music as “descriptive, specific, lush, and oddly exotic.”

The CD presents the premiere recording of one of Amirkhanian’s most well-known and warmly received works, Walking Tune – A Room-Music for Percy Grainger. Amirkhanian writes:

"Walking Tune (1986-7) is an homage to one of my favorite figures in 20th century music history, the Australian-American composer and pianist Percy Grainger (1882-1961)... A great worshipper of the outdoors, Grainger conceived of his piano solo 'Walking Tune' during a tramp through the Scottish highlands in 1900. It is a simple and charming paean to those all-too-few joyous escapes from life's everyday cares. Grainger spent the final years of his life in a frustrated attempt to create a music synthesizer which would free him from the restrictions of conventional musical instruments, performers, and formal compositional structures. In this work, originally conceived for radio, I used the Synclavier digital synthesizer, a tool Grainger eagerly would have embraced, to combine sounds recorded out of doors in Hurricane, UT (tramping), and Pagosa Springs, CO (a swarm of hummingbirds), with sounds sampled from a variety of sources in Australia. The music is, for the most part, unabashedly pretty, as is much of Grainger's own output."

"Mixing the real and the imaginary is a skill that very few composers have. Charles jumps back and forth between these worlds with delightful ease, his curiosity and humor always evident. But in Walking Tune – and many of the other pieces he's done over his long career – this skill is mixed with a sensibility that is elegiac."

Another premiere recording includes the invigorating Chu Lu Lu, about which Amirkhanian comments:

"Imagine that you were asked to create a 60-second 'commercial' in the form of a work of new music which was to be aired on a European rock station. Furthermore, that the sound of the piece was, in some way, to exemplify the cultural connection between France and the U.S. Via immigration, migration, domination, and through war and peace, the populations of these two nations have, by the late 20th century, taken on striking multi-cultural profiles, which in the allotted time can be only hinted at here. My solution was to collage snippets of various ethnic musics, both from the former French colonies and from Cajun and Native American music."

This CD also presents the premiere recording of the playful Gold and Spirit. Amirkhanian explains the piece’s origins:

"The title of Gold and Spirit (1984), borrowed from Swiss psychologist Carl Jung, here refers ironically to prize medals and cheering crowds, both integral parts of Olympic competition. When asked to write a piece of music for radio broadcast as part of the 1984 Olympics Arts Festival in Los Angeles, I recalled going to basketball and football games and playing drums in marching bands during my youth, and that one of my cherished ambitions was to have sports cheers of my own design, with the names of artists as texts, performed at real sporting events. In the '60s and '70s I began composing these group cheers, such as 'Ray Man Ray,' 'Go Van Gogh, and 'Marcel – Duh Champ.' The cheers incorporated in Gold and Spirit include spoken phrases processed by a Buchla Synthesizer, an Eventide harmonizer, and a Lexicon reverberation unit; some of the cheers were constructed with 64 images of my voice, layered in the 1750 Arch Street Studio in Berkeley. Other sound sources include actual sporting events (cuero, racquetball, lawn bowling, indoor soccer, baseball, handball, and basketball), as well as drum cadences produced by a synthesizer."

Amirkhanian writes about the haunting Bajanoom:

"The somber mood of Bajanoom (1990), the Armenian word for 'separation,' mirrored my own feelings in light of the many nationalist movements, from Montréal to Yerevan, which have surfaced recently after many years of frustration and bitterness. Gong sounds sampled at the home of Lou Harrison are combined with the sounds of a musical saw, coffee grinder, guitar, and strings."

"The title of Vers Les Anges (1990) comprises several references to the dedicatee, Nicolas Slonimsky, for whom the music was composed in celebration of his 96th birthday. A resident of Los Angeles, (Les Anges, in French), Slonimsky translated Schloezer's life of Alexander Scriabin, composer of the piano work 'Vers la flamme.' For my tribute, I assembled a number of musical references appropriate to Slonimsky's life. As a conductor, the Russian prodigy directed the first performance of Edgar Varèse's Ionisation (1931), which features the sounds of sirens and a battery of percussion instruments, referenced at the beginning of Vers Les Anges. Other raw sonic materials include the sound of a German music box (from the period of Slonimsky;s youth), a digitally sampled komungo (played by Korean virtuoso Jin Hi Kim), and cuckoo clock and cat sounds which recall Slonimsky’s home."

Anderson concludes that "Humor, colorful cinematography, and a brilliant sense of imaginary space are just some of the joys of this CD."

Laurie Anderson:
"The art of audio collage has been reinvented here... I'm reminded of Brian Eno's music for imaginary films, although Charles takes this idea much farther."

Composer, percussionist, sound poet, and radio producer Charles Amirkhanian (b. 1945) is a leading practitioner of electroacoustic music and text-sound composition and has been instrumental in the dissemination of contemporary music through his work as Music Director of KPFA/Berkeley from 1969 to 1992. He also directed the Speaking of Music series at the Exploratorium in San Francisco (1983-1992) and was the founding Co-Director (with John Lifton) of the Composer-to-Composer Festival in Telluride, Colorado (1988-1991). From 1993 to 1997 Amirkhanian was Executive Director of the Djerassi Resident Artists Program in Woodside, California. In 1998 Amirkhanian was appointed Executive Director of the Other Minds music festival. His music has been recorded on 1750 Arch Records, Composers Recordings, Inc., Giorno Poetry Systems, Fylkingen Records (Sweden), S Press (Germany), OU Records (England), Perspectives of New Music, and Diffusion i Média (Canada).