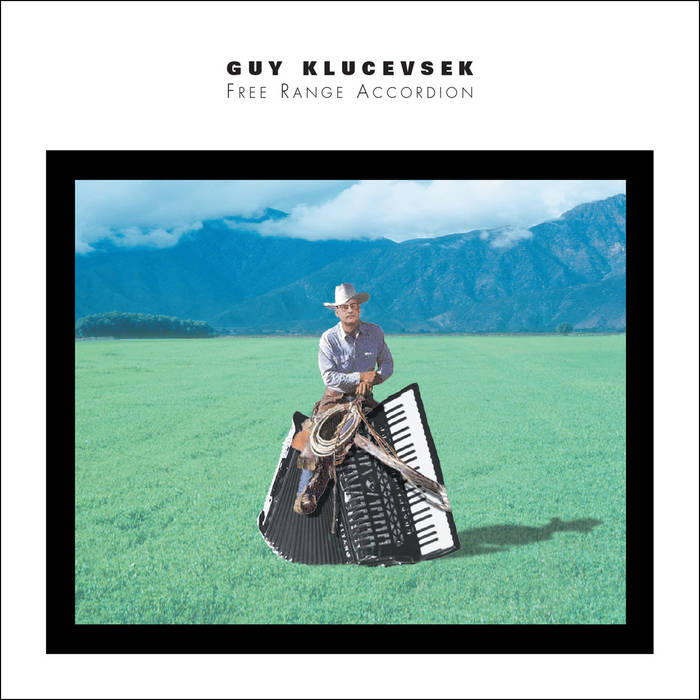 This Guy Klucevsek recording ranges from the highly emotional to the bizarrely witty. The CD presents the premiere recording of the profoundly intense Hymn from the Pulitzer Prize-winner Aaron Jay Kernis. The composer considers the work, based on his haunting memories of visits to concentration camps, as one of "a series of works which have taken a central position in my oeuvre." Other deeply personal works are Somei Satoh's spiritually reflective Recitative (written after his stepfather's death) and Jerome Kitzke's boisterous Breath and Bone (a elegy for a good friend).

Guy Klucevsek's Bacharach arrangements move from the delightfully ridiculous to the sublimely ethereal in just a few short minutes. The performer writes that Lars Hollmer's piece has "one of the most beautiful melodies I have ever heard," while Klucevsek's own Three of a Kind offer what Starkland feels are possibly the most austerely gorgeous works yet penned by the accordionist. Add in Stephen Montague's virtuosic work and Lois V Vierk's energetic piece (also both premiere recordings) and the result is a powerful, highly varied recording.

“The Furies, or Erinyes, as they were called in ancient Greek, were three fleet-footed figures in Greek and Roman mythology who pursued and punished earthly evildoers... In the same mythology, Aeolus was King of the Four Winds and viceroy of the gods. The aeolian harp, in which strings are gently played by the wind, is derived from his name. Aeolian Furies exploits the accordion’s unique hurricane mechanics in a whirlwind of aeolian scales played with punishing fury. The work was commissioned by Guy Klucevsek.”

“Breath and Bone (1996) is a elegy written in memory of my good friend and colleague, the percussionist Gregory Charnon (1955-1995). Scored for solo accordionist/vocalist, the work is meant to honor the indomitable spirit of Gregory, whose sense of humor and courage remained on full display in the face of grave illness and death. Commissioned by and written for Guy Klucevsek, Breath and Bone was premiered by Guy on March 23, 1996 at Merkin Hall in New York City.”

“In the autumn of 1990, my stepfather passed away at the age of 73. I wrote Recitative in 1991 as a prayer for the peace of his spirit in the firmament. The work is dedicated to Guy Klucevsek. My music is limited to certain elements of sound and there are many calm repetitions. There is also much prolongation of a single sound. I think silence and the prolongation of sound are the same thing in terms of space. The only difference is that there is either the presence or absence of sound. I would like it if the listener could abandon all previous conceptions of time and experience a new sense of time presented in this music as if eternal time can be lived in a single moment.”

“I wrote Blue Jets Red Sprites (1996) for Guy Klucevsek, who first introduced me to the wonders of the accordion in 1984. Guy produces the most varied colors and expressive dynamics from the instrument – deep and powerful tones, strong middle register sounds with octave doublings, high-pitched soft, fragile timbres, etc... Once I’d heard Guy’s beautiful and expressive playing I was forever hooked. Blue jets and red sprites are two kinds of lightning that flare at the outer limits of the earth’s atmosphere… One theory of jets and sprites states that after a strong lightening bolt there is an upward rush of electrons. As the electrons surge upward in a kind of upside down avalanche they eventually collide with nitrogen molecules. This makes them glow blue or, at higher altitudes, flash bloodred. These visual and sound ideas were the starting points for the music.”

“Three of a Kind was composed for the dance piece, ‘Span,’ choreographed and danced by Bebe Miller, Susan Braham, Shelley Lasica and Sandra Parker, premiered by Guy Klucevsek and Anne DeMarinis, accordions, at Wave Hill, Bronx, NY, July, 1997. In my first meeting with the four choreographers, they showed me sketches of six duets (all the possible duo combinations of four dancers), each about a minute long. I took it as a challenge to created six short pieces, each of which would immediately establish and maintain a particular mood. Three of the pieces I eventually grouped in concert form as the boisterous and effervescent Mug Shots (heard on Dave Douglas’s CD ‘Charms of the Night Sky’), and the other three, a set of more introspective chorales, became Three of a Kind, performed here in an expanded solo version.”

“I found The Blob (1958) on a tape John Zorn compiled for me which he called ‘Rare Bacharach.’ Bacharach wrote this tune for the horror B-movie of the same title, and it became his first hit as a composer. As an acoustic kinda guy, I was tickled pink to hear hand-clapping and mouth percussion produced the old-fashioned way – live, by human hands, fingers, and cheeks. And as a creator of some pretty dumb lyrics myself (Donut Ask, Donut Tell), I immediately got into the spirit of Mack David's words.

“This version of One Less Bell To Answer (1970) was inspired by the image of the bell in the title, and by the fact that I had been performing and recording John Cage’s piece Dream at the time. Dream is a solo piano piece (1948) consisting of a single-line melody, played with the piano pedal down throughout, so that the melody generates its own harmony. In One Less Bell To Answer, I’ve used the beautiful, high, piccolo reeds of the accordion and stripped the piece down to its melody line only – devoid of the original harmonies and rhythm – and approached the notes like Gregorian chant.”

“In 1991 I began a series of works which have taken a central position in my oeuvre: Aria-Lament for solo violin, Hymn for solo accordion, Colored Field for English horn and large orchestra, Still Movement with Hymn for piano quartet, and finally Lament and Prayer (which completed this series in 1995) for violin, string orchestra, oboe and percussion. Since 1990 I had become emotionally and intellectually involved with issues of war and suffering that were flaring up around the world, from the riots in Los Angeles to the Persian Gulf War and the ongoing conflicts in Bosnia-Herzegovina. Not long before, I had visited the concentration camps of Auschwitz and Birkenau, and later found myself haunted by images from them. A deepening interest in my heritage and in Judaism, surfacing from reading about the Holocaust and the more recent return of ethnic cleansing in the Balkan conflict, began to bleed heavily into the emotional and conceptual world of my compositions.

“When Guy Klucevsek asked me for a second piece for solo accordion (I had written a brief, silly polka for him in 1987), I felt it was time to write a larger and more serious work. My musical and emotional concerns called for a dirge-like mood and an organ-like texture well-suited to the accordion; I must have subconsciously recognized the appropriateness of this instrument so important in Eastern European folk music... Hymn is dedicated to Guy Klucevsek.”

"Regarding Boeves Psalm, as a child my mother couldn’t pronounce the name 'Morbror Edvard' (Uncle Edvard), so she chose to call him Boeve. This became so natural that he acquired the nickname for the rest of his life. He died in 1977, and at that time I found the first extracts of the tune, which I later dedicated to him. 'Psalm' means Hymn. I’m not sure how many versions of this song exist, but there are at least 15, including Guy’s arrangement and an orchestral performance released on a Swedish classical label. The song seems to catch the attraction of the average person, which really pleases me."

Klucevsek has redefined the status of the accordion in new music. As a “rebel with an accordion,” he “combines poker-faced wit and imagination with command of his instrument, forcing you to re-think the accordion’s limitations” (Downbeat). He is “a remarkable performer on a remarkable instrument” (Village Voice), and the uninitiated must “forget everything you thought you knew about the accordion” (The Seattle Weekly).

Klucevsek can also be heard on John Williams’s orchestral scores for the Steven Spielberg films, “The Terminal,” “Munich,” “Indiana Jones and the Kingdom of the Crystal Skull,” and “The Adventures of Tin-Tin.”