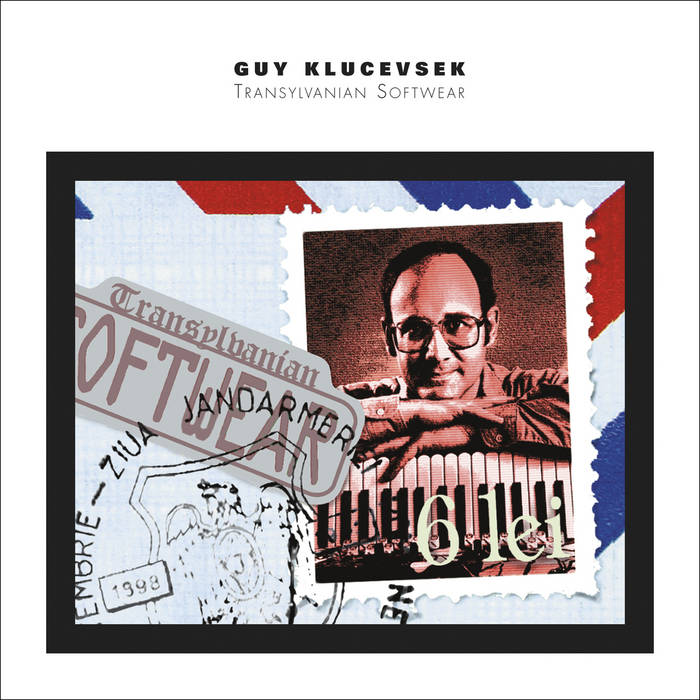 Guy Klucevsek consistently offers some of the most listenable new music heard today. Kyle Gann comments that "Klucevsek is one of those natural-born musicians incapable of turning out an unmusical phrase," noting the "graceful musicianship that informs his every gesture." So it's not surprising that Stereo Review awarded this CD a "Recording of Special Merit," calling it "a funny and original album by an unusual artist."

Klucevsek's "original, sweetly postminimal vocabulary" often draws on world folk music. The title piece on the CD is based on Hasidic wedding music, while the lovely "Viavy Rose" Variations is based on traditional melodies from Madagascar, and the moving Perusal is inspired by Andean pan-pipe music. The rhythmically infectious Three Microids is a tribute to Bela Bartok, and the heartfelt Bandoneons, Basil and Bay Leaves was written in memory of Astor Piazzolla. Other pieces include John Zorn's zigzagging Road Runner, William Duckworth's smoothly exotic Slow Dancing in Yugoslavia, and Fred Frith's oddly humorous The Disinformation Polka.

Here are excerpted comments about these pieces from Klucevsek:

"To the extent that the compositions on this album have a unifying theme, it is that they are based on, or influenced by, popular and folk music from all over the world. Transylvanian Softwear is based on Hasidic wedding music. The 'Viavy Rose' Variations are based on two traditional accordion melodies from Madagascar.

"The Road Runner-and-Coyote cartoon scores of Carl Stalling inspired Road Runner, which refers to just about every piece of music ever written. I originally recorded Road Runner in 1986 for my cassette-only release 'Blue Window' (Zoar, out-of-print), and re-released that recording on my CRI CD 'Manhattan Cascade.' Interestingly, the first time I played Road Runner was the first recording. John Zorn created the piece for, and we approached it as, a 'studio' recording. For the first recording I plugged my accordion directly into the mixing board, with no room ambiance, and using discrete left/right separation of the hands. We recorded each five- to fifteen-second segment separately, then bounced the tracks, to preserve the feeling of recording in real time and to avoid editing. Since 1986, I have probably performed Road Runner more than 200 times; I wanted to do a real-time, 'live' acoustic performance for this recording.

"Perusal exploits the sounds heard in Andean pan-pipe music. It appeared on my 'Flying Vegetables of the Apocalypse' CD in its original version for two violins, cello, and accordion, but I have most often performed it as a solo.

"The Three Microids are my tribute to Bartók. My Right Foot, on the Other Hand is a study in polymeter. The right hand is in 3/4 time, while the left is usually in 5/4 or 10/8. Eleven Large Lobsters Loose in the Lobby is in 11/8, and is a percussion-only piece. Bustin' Broncos in the Balkans is in 13/8.

"Listen carefully to the eight sections that make up Slow Dancing in Yugoslavia, and you may hear what the evergreen ballad It's All in the Game ('Many a tear has to fall...') would sound like if the notes were rearranged to an Eastern European modal scale and the time changed to an Eastern meter.

"The Disinformation Polka was orignally recorded by my group 'Ain't Nothin' But a Polka Band' on Volume Two of Polka from the Fringe. However, Fred Frith has always loved the solo version. He says it is zanier and more manic, so I promised him I would record the solo version at my earliest opportunity. I asked Fred whether the title was political. He replied 'No, it just reflects the fact that I have no idea what a polka is.' "

Guy Klucevsek is one of the world’s most versatile and highly-respected accordionists. He has performed and/or recorded with Laurie Anderson, Bang On a Can, Brave Combo, Anthony Braxton, Anthony Coleman, Dave Douglas, Bill Frisell, Rahim al Haj, Robin Holcomb, Kepa Junkera, the Kronos Quartet, Natalie Merchant, Present Music, Relâche, Zeitgeist, and John Zorn. He has premiered over 50 solo accordion pieces, including his own, as well as those he has commissioned from Mary Ellen Childs, William Duckworth, Fred Frith, Aaron Jay Kernis, Jerome Kitzke, Stephen Montague, Somei Satoh, Lois V Vierk, and John Zorn.

He is the recipient of a 2010 United States Artists Collins Fellowship, an unrestricted $50,000 award given annually to "America's finest artists."

His 1987 project, Polka From the Fringe, a collection of commissioned polkas by Fred Frith, Elliott Sharp, Bobby Previte, Carl Finch, et. al., toured around the world and was released on 2 CDs on the eva label, and were named “best recordings 1992” on WNYC-FM’s “New Sounds” program. In 1996, he founded Accordion Tribe, an international ensemble of composer/accordionists that toured internationally from 1996-2009; were the subjects of Stefan Schwietert’s award-winning documentary film, Accordion Tribe: Music Travels; and released 3 CDs on the Intuition label.

Klucevsek has released over 20 recordings as soloist/leader on Tzadik, Winter & Winter, innova, Starkland, Review, Intuition, CRI, and XI. Stereo Review cited his Starkland recording, Transylvanian Software, as a "Recording of Special Merit." He can also be heard on John Williams’s orchestral scores for the Steven Spielberg films, “The Terminal,” "Munich," “Indiana Jones and the Kingdom of the Crystal Skull,” and “The Adventures of Tin-Tin.”

"Klucevsek is a trailblazing virtuoso."
– The Wall Street Journal

"Forget everything you thought you knew about the accordion."
– The Seattle Weekly

"A rebel with an accordion...Klucevsek combines poker-faced wit and imagination with command of his instrument, forcing you to re-think the accordion’s limitations."
– Downbeat

"Klucevsek is a musical Orient Express whose themes pass from Hungarian gypsy to Slovenian waltz to Middle Eastern wail without stopping at the borders."
– Tom Strini, Milwaukee Journal Sentinel