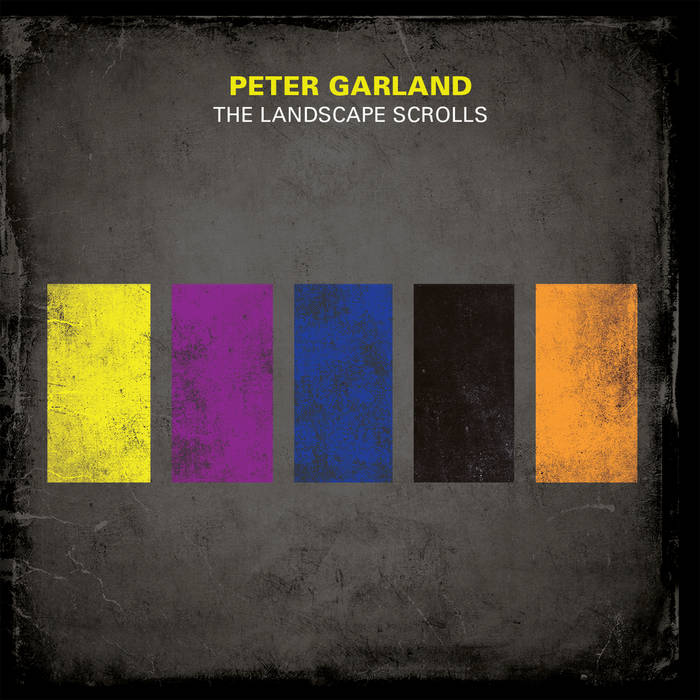 “Garland creates music that is at once
elemental and sophisticated, intimate and expansive.”
– John Luther Adams

The maverick composer Peter Garland is an under-recognized pioneer of minimalism, “an avatar of an experimental American tradition” and “a composer of mesmerizing music” (Kyle Gann). This premiere recording of his 50-minute The Landscape Scrolls strongly embodies his distinctiveness.

John Luther Adams notes, “Peter Garland lives an uncompromising life.” Avoiding the traditional path of a contemporary composer, he has instead spent much of his life absorbing music cultures around the world.

Each of the five movements is a monochromatic study, more about resonance and space than melody or harmony: mid-day (Chinese drums); afternoon (rice bowls); after dark (triangles); late (glockenspiel); early morning (tubular bells). Garland notes that, after the fact, he was likely influenced by his fascination with the single-tonal color paintings of Barnett Newman.

Writing in the CD’s liner notes, Adams comments, “The expressive power of this music comes not from the notes on the page, but from a deeper resonance, from the magical power of sound itself … A set of drums reconnects us with the ground beneath our feet. A few triangles become an enormous carillon, a nocturnal bell tower, a call to prayer in the temple of night. The gentle clanging of tubular bells becomes a morning chant, saluting the sun, greeting the new day. Listening to this music we are grounded again, we are filled with wonder … These are musical landscapes [but also] prayers for the seasons, the hours of night and day, prayers for humanity and for all life on this planet.”

Adams adds, “Employing just one musician and a limited array of instruments, Garland reminds us of the magic all around us, and the imperative to rediscover our proper place in the miraculous and mysterious dance of life on this earth.”

Peter Garland (b.1952) was in CalArts’ original class (1970). His principal teachers were Harold Budd and James Tenney. As editor, essayist, and publisher of SOUNDINGS magazine and press from 1971 to 1991, he played a pivotal role in the re-evaluation of composers such as Nancarrow, Revueltas, Harrison, Bowles, Rudhyar, Partch, and Tenney. Garland lived in Mexican Indian villages during the late 1970s, and spent the 1980s in Santa Fe, NM, where Native American and Hispanic traditions in the greater Southwest became major influences. In 1991 Garland embarked on a 42-month journey to Mexico, Australia, New Zealand, Bali, Java, Vanuatu, Germany, Morocco, Japan, and Turkey.

Much of Garland’s musical work has been considered post-minimal, although many, such as The Days Run Away (1971), were written in the early 1970s at the same time as the earliest minimalist works. Wire Magazine writes, “He has sometimes been classed as a minimalist, but Garland’s economy and radical consonance are manifestations of his own spatial sensitivity and clarity of attention, rather than signs of his allegiance to some shared compositional creed.” Garland has written for the pianists Aki Takahashi and Herbert Henck, percussionist William Winant, accordionist Guy Klucevsek, and the Abel-Steinberg-Winant Trio. In 1991, New York’s Essential Music presented a twenty-year retrospective of Garland’s work.